Scroll down or open the navigation to get started. 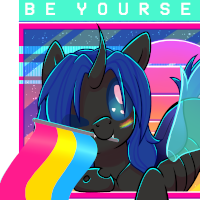 Hi, I'm LinuxPony! I'm a full stack developer from Canada employed writing code. I work on a number of code projects on the side like maintaining the Vanhoover Pony Expo website among other things. I'm also a tech enthusiast, brony, furry, and convention volunteer! I love meeting new friends and hanging out so don't hesitate to say hi!

Swift Dawn is a male changeling of average stature and build by pony standards. He is a male, young adult, with an blue messy mane and tail, and dark gray soft chitin. On occasion his normally soft chitin can be replaced with that of a short, soft fur coat. On his back sits an affixed plate of a dark blue chitin. This panel is slightly harder then the rest of his body's chitin. Sprouting from his back plating is two translucent light blue wings. These wings are surprisingly durable and flexible despite their fragile look but can still tear under stress. His underbelly has long grooved, black platting about the same softness as the rest of his chitin, wrapping from one side of his back plating, across his belly and up to the other side. He has blue eyes and fangs visibly poking out from behind his closed lips. Like normal changelings, he has holes in his front and back legs as well as a curved horn atop his head. Unlike normal changelings, he has pony-like ears and a full mane and tail of the aforementioned blue hair. His horn when using magic, gives off a soft neon green glow.

Swift was found and adopted by the Dawn bat pony family at a very young age and grew up in Canterlot his whole life. He never knew his biological family but is perfectly content with his adoptive one. He grew up with his sister Mythic Dawn, eventually living with her in a town house in Canterlot's middle class district. Swift learned to transform from a young age and never grew hungry due to the familial love he got from his family. He never developed a link with his biological hive's hive mind, presumably due to distance. Swift works as a civil engineer for the Royal Canterlot Engineering Guild, adopting the persona of a cyan pegasus with a blue mane as a cover identity. While later more widely accepted, Swift was used to hiding his identity from everyone, a task that proved more difficult post chrysalis's attack on the city.

Swift has a chill and laid back attitude and outlook on life, taking things one day at a time. He has a "forgive and forget" ideology and sometimes doesn't take things as serious as they should be taken. He's mostly a pacifist, happy to let others do the fighting instead of himself. He has no allegiance to any faction but will follow his sister's lead should push come to shove. Swift was never really interested in any serious dating and finding his soul mate. He does have his fair share of fun with other ponies, most random patrons of the local bar. While he is sustained on familial love, other types have different tastes that can be appealing, everything from romantic to lust. Apart from that, Swift loves to go for long walks around the city, meet up and hang out with friends, and read a good novel (daring do is right up his ally). 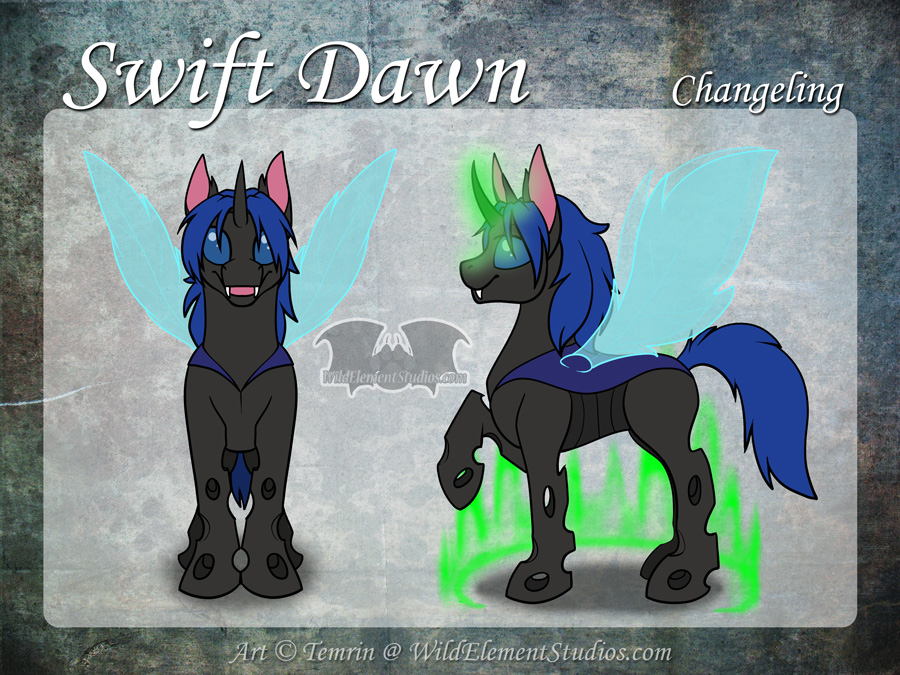 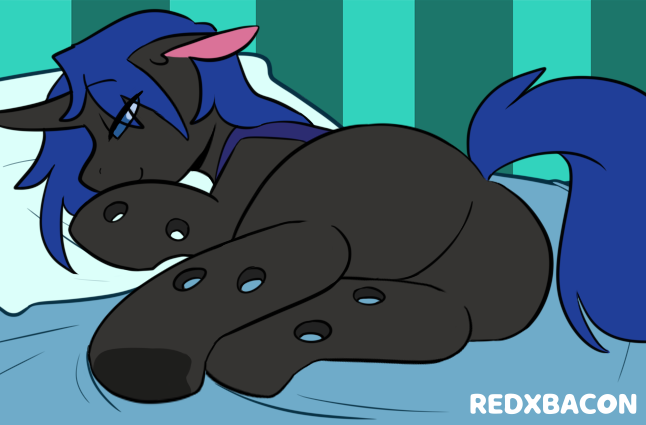 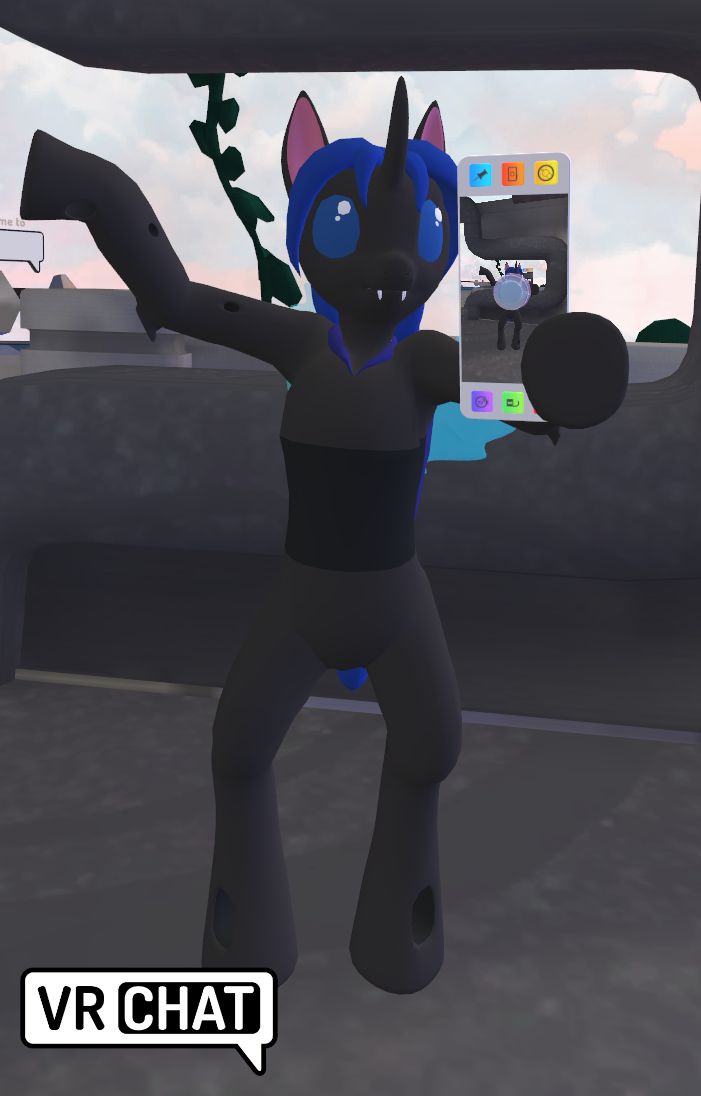 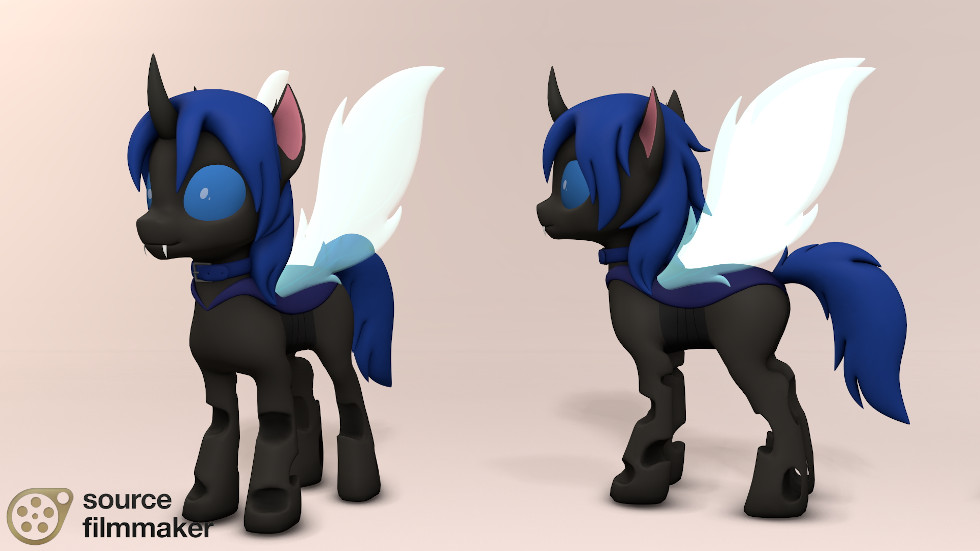 Mythic Dawn is a female bat pony of average stature and build for a bat pony of her gender and age. She is a female, young adult, with a light and dark striped brown mane and tail, and gray coat. Her bangs are straight cut and her mane is done up in a ponytail secured by a purple hair band. Sprouting from her back is two gray bat wings with a dark brown membrane. Her tail is long and neat, matching her mane. She has purple eyes and fangs visibly poking out from behind his closed lips. On her flank sits her cutimark; a depiction of two blue spheres crossing over in an X formation.

Mythic was born to the Dawn bat pony family and grew up in Canterlot her whole life. She grew up along side her adoptive brother Swift Dawn the changeling. The two grew up very close to each other and developed a strong bond. They eventually moved in together as roommates in a town house in Canterlot's middle class district. Mythic had an interest in joining the royal guard from a young age, desiring to continue to family's long history of serving Canterlot and the princesses. She eventually joined up officially, patrolling the castle grounds at night and securing the premises.

Mythic can be described as high energy. Though she can be mature and take thing seriously, particularly at her job, she loves to let loose and be herself. She's fun loving, a bit foalish at times but ultimately her hart is in the right place. She has a strong allegiance to the moon princes and her extended bat pony family, willing to fight and die for them. Mythic loves dating ponies though the dates usually don't go anywhere. She finds them entertaining for the most part and loves to teas her would be partners. Apart from that, mythic loves to go for long walks around the city, meet up and hang out with her mare friends, go clubbing, and read a good novel (she finds trashy romance entertaining). 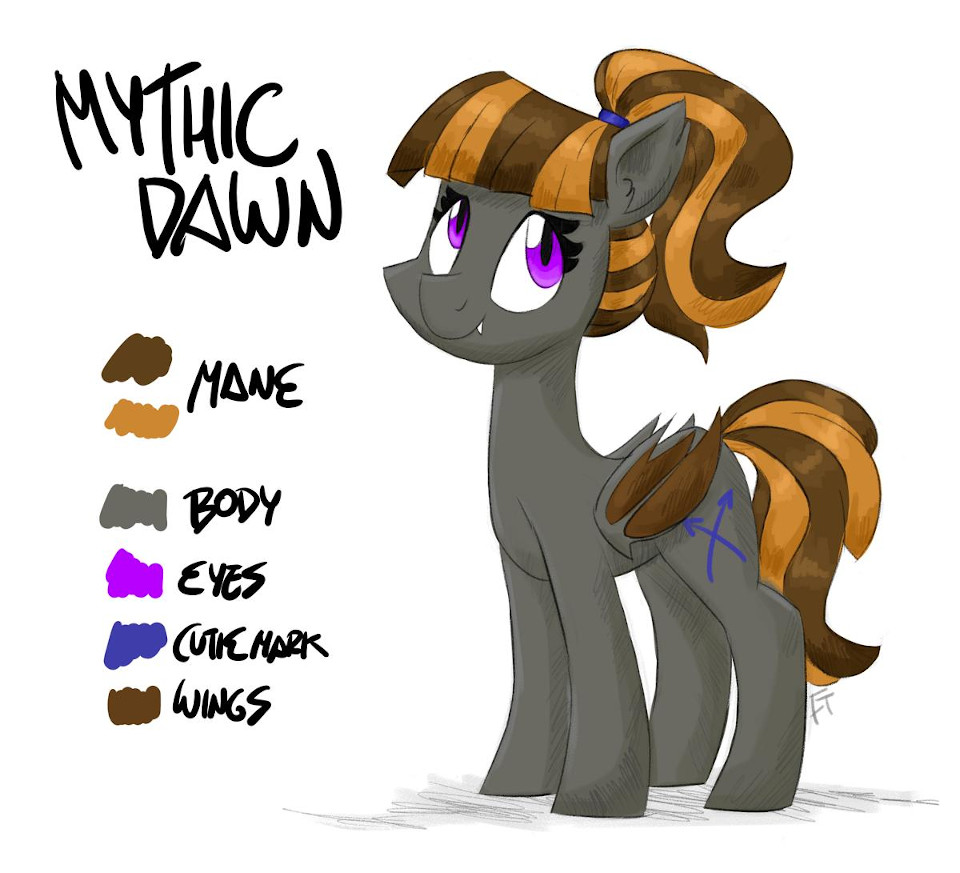 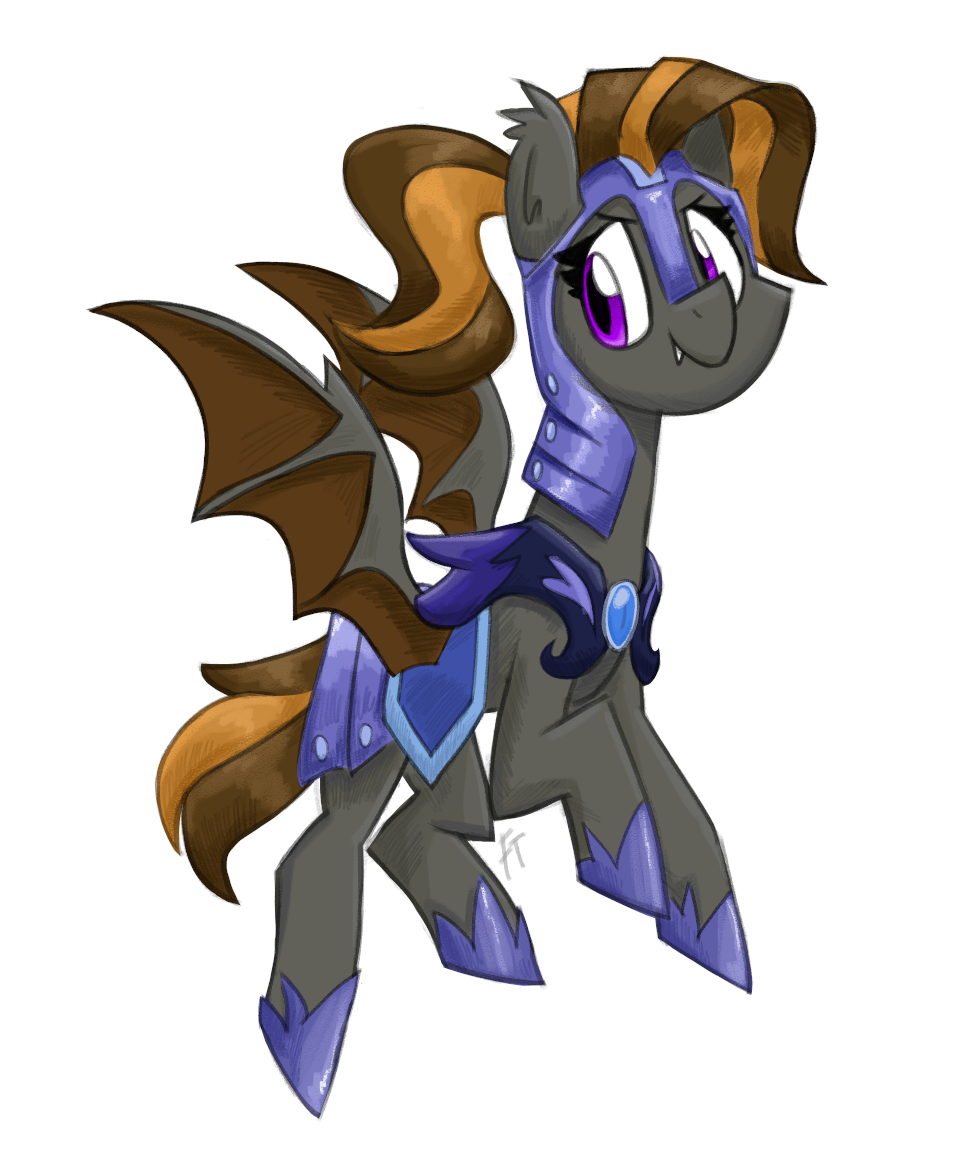 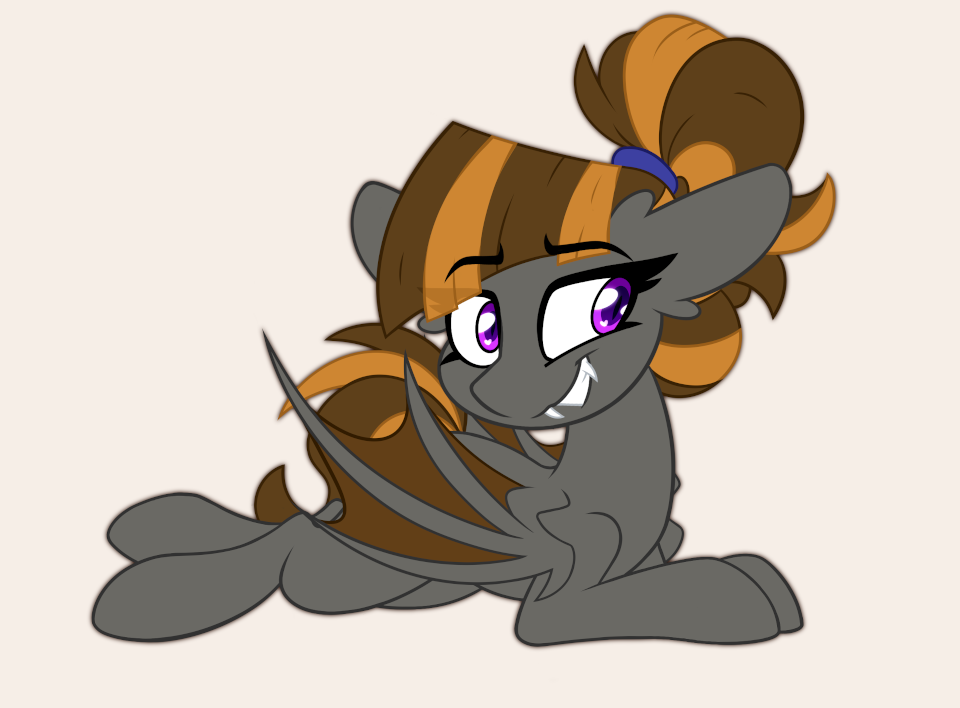 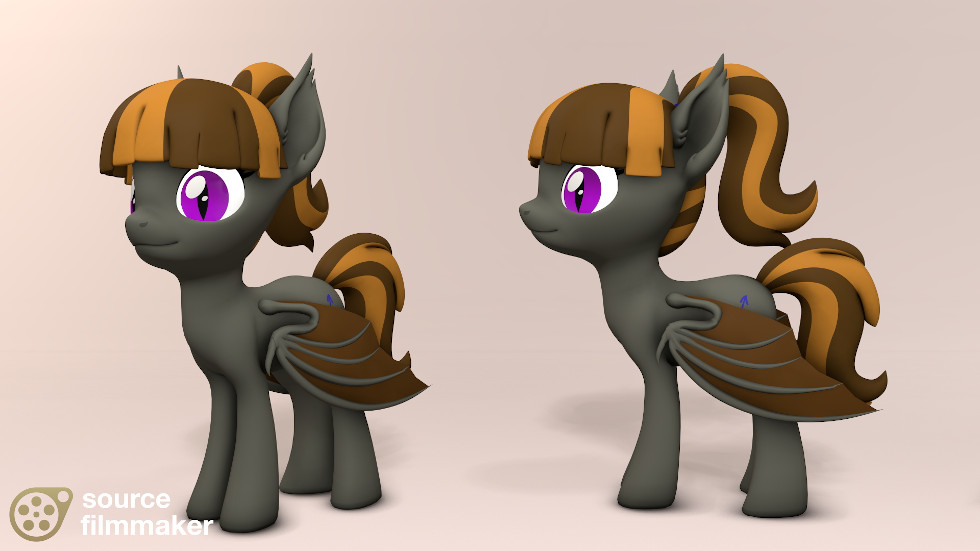 Sugar Dawn is a female alp-luachra of average size for her species, fitting in the palm of a human hand. She looks almost like a miniature earth pony, with the exception of having a snake like tail and a different coat color along her belly. Though she is an adult and fully matured for her species, she is a bit younger then Swift and Mythic. Sugar is a female, young adult, with a light and dark striped green mane, and a two toned brown coat and tail. Her mane is slicked back and short, taking a naturally glistening look, being naturally oily and hydrophobic. The same oily and hydrophobic property can be found on her coat, making it easy to maneuver in tight situations. her underbelly is a lighter shade of brown, that coloration continuing up her neck and down her tail. She has a pair of curious blue eyes and freckles on her face.

Sugar was born in the Everfree Forest. Her species doesn't really do families so she was left to fend for herself. Growing up in relative seclusion from society, she survived in her natural habitat to adulthood before Mythic crossed paths with her. The two formed a bond and Mythic decided to bring her home as a new member of the family. Sugar grew quite close Swift and Mythic, quickly picking up language skills and learning about the world. She spends her days at their residence, relaxing and causing whatever mischief she can.

Sugar is a troublemaker. Wherever she pops up, her antics are not far behind. She has a bad habit of trying to push things as far as she can until she inevitably gets in trouble. She isn't evil, she just struggles with the concept of boundaries, especially personal ones. She does actually care though and is genuinely apologetic if she hurts someone. She loves to play games and excels at puzzles and logic problems. She's also quite good at math, sometimes assisting swift with his day job. She does get lonely sometimes, being that she doesn't know anyone of her own kind to connect with but does have a few friends outside of the dawns to play with. Sugar enjoys cooking, puzzles, and creating rube goldberg like machines in the house.

Note: This version of Alp-Luachra is an original species made by Badumsquish. They were based off Irish folklore. If you want to read more about this version of them, go here. 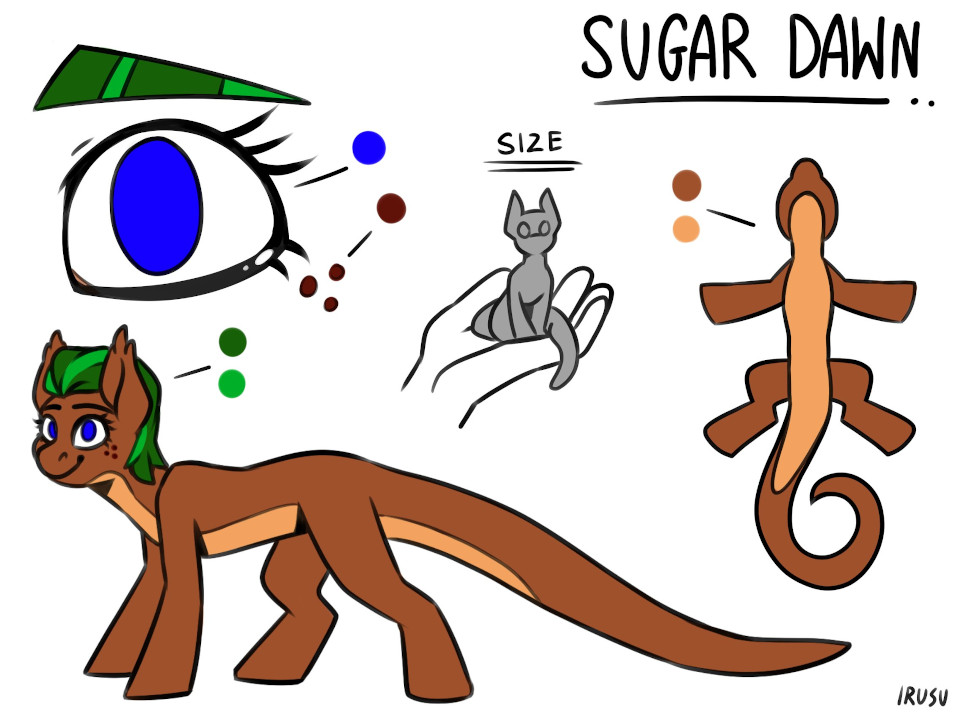 Rinne is a male Avali. He is of average build and stature for one of his species. His coat is primarily a light blue with a dark gray secondary with dark blue markings. He has white claws on his hands and feet along with several dark strips up his feet and legs. His coat markings are fairly consistent with the kita'vali subspecies with a few minor differences. His tail comes out to one single big feather at the end, with a large blue marking on the tip. His eyes are fairly unusual for his species, having whites where others just have a continuation of their iris color. Though not visible, Rinne has a few bio mods, although fairly basic one. These include Guardian nanites, the environmental protection augment (EPA) and of course a Nexus interface device, all fairly standard for Avalis.

The backstory for Rinne has yet to be determined as this character was newly created. This section will be updated once a backstory is determined. This is meant to be a fursona of sorts so will likely reflect my own personality somewhat.

Note: Avalis are an original species made by RyuujinZERO. It's a open species with only lose guidelines lore wise. You can read up on the lore there is on the Avali Wiki.

Turning on this setting will show you adult material not suitable for minors! By clicking "Confirm", you agree that you are at least 18 years of age and the age of majority in your country.

Accessing the share folder may expose you to adult material not suitable for minors! By clicking "Confirm", you agree that you are at least 18 years of age and the age of majority in your country.